We have already discussed the key differentiating factors between CaaS vs. IaaS, CaaS Vs. PaaS, and PaaS Vs. SaaS in the previous blogs. Now, we will be discussing the key factors that separate SaaS and IaaS through this blog.

SaaS Vs. IaaS: Which is More Popular?

We can see from the above graph that SaaS is by far more popular than IaaS over the period of the last five years.

Software-as-a-Service, aka SaaS, is a cloud computing platform that allows its users to use the software through the cloud on a rental subscription basis.

And, it is quite popular amongst businesses as you can avoid investing heavy costs associated with the purchase of software. It is one of the best examples of the OPEX shift.

Infrastructure-as-a-Service, aka IaaS, is a cloud platform that provides its users with virtual infrastructure.

It includes virtual machines, virtual storage, and software-defined networks (SDNs) as well. IaaS largely fulfills your infrastructure needs and is quite useful when your resource requirements fluctuate.

SaaS is quite useful when you cannot or don’t want to purchase software on a permanent basis. You can use the web-based application or its desktop versions instead.

SaaS is ideal for such cases. But it can also be used when you don’t have enough skill sets to create your application substitute.

On the other hand, IaaS is more useful when your on-premise infrastructure is unable to handle a large workload or, in some cases, varying workload, or even when you need to work heavy resource-consuming applications.

SaaS Vs. Iaas: Scalability and Availability

As SaaS involves third party software, it is much easier to scale and is widely known for its high availability.

SaaS is more suitable for tech start-ups and also to the wider range of audience as most of the companies need one software or another.

As you can save a lot of money by opting for a SaaS solution, it is suitable for all sizes of organizations.

But, on the other hand, IaaS is more suitable where you need to work on customer-centric projects that are highly varying in workloads.

They are also useful when you don’t have the budget to purchase the required infrastructure.

Also Read: CaaS vs. IaaS: What’s the Difference Between the Two?

SaaS Vs Iaas: Pros and Cons

But, you cannot downgrade the current model mid-term.

You can opt for a free trial with most of the IaaS vendors. The pricing model varies from one vendor to another, but typically you are charged based on resource consumption. The lock-in periods are on the higher side with IaaS. 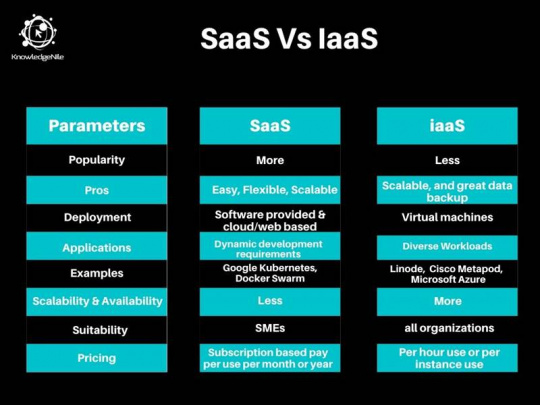 You can use both SaaS and IaaS for different processes at the same time and integrate these in some exceptional cases as well.

Also Read: PaaS vs. SaaS: Detailed Difference Between the Two